Or as technical as it will ever get with me! I was listening to a podcast earlier  and the guest was Matt Fitzgerald (who I’d never heard of before admittedly) and the subject was about motivation and percieved effort in running. How can athletes push themselves further than they thought they could. It centres (it seems to me) around the old mind over matter theory, that it’s our minds ability to endure that snaps first not the body. I really enjoyed the podcast even though I guess its principally based on elite athletes or those looking for race wins or great times.  I couldnt do it justice explaining it as I think i’ll have to give it another listen just to fully comprehend it. Its at this site anyway and called “How bad do you want it?”

This led to me thinking (not always a good thing) about what is motivating me with running right now?  I’ve done a half marathon, I’ve run up to 15 miles off road so I guess its the full trail marathon next?  I swear I never got into this “to do a marathon” it’s not a bucket list thing (I have no buckets or lists) but it seems the next natural progression. I probably haven’t really considered it before as it seemed completely impossible six months ago. But there we go, as long as I go at it all at my own pace so it doesn’t consume me or become a chore I’m happy to give it a go …. Is that enough motivation? I think it is for me, perhaps not for others. To try to do something just to see if you can seems a legitimate way to live to me.

So two days off and champing at the bit today after work. Had a few things I wanted to try, I knew the tide was in so it would have to be the cliffs – I say have to be, it’s hardly a chore to run anywhere around here.

I wanted to slightly modify my form again towards the chi running technique of leaning forward and getting away from my heel striking and had a good practice at it. It’s really hard though to change ingrained technique though because as soon as I stop concentrating my body slips back to its natural form.  However I do think it’s worth persevering with because I swear the knee ache dimmed. A further complication is that front foot striking does lead to me increasing my pace which I’m sure many would argue is no bad thing but I do know that endurance is more important to me than speed and increased pace = decreased distance at my current level of fitness.  Conclusion … I shall sleep on all this!

I did manage four and a half miles without exploding my ventricles or falling flat on my face and was surprised to see a near 10 minute pace – However this does include a mile or so of road running which is a bit like cheating in my rather weird little brain. 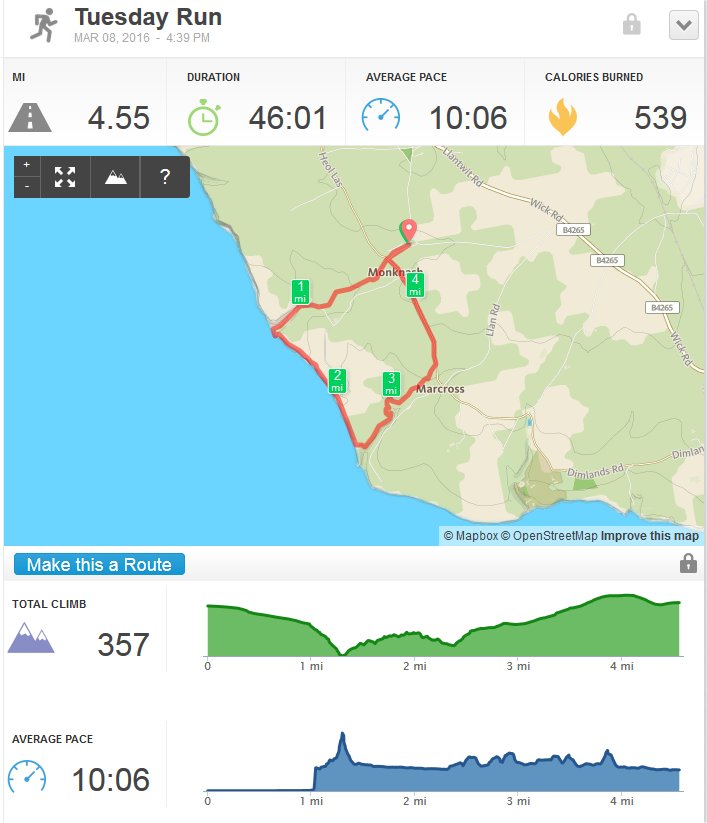 5 thoughts on “Oooh it’s all gone a bit technical”