We’ve not been up to much running wise lately – the odd trot and adventure.  With only 3 weeks to Preseli ive been trying to rehab the leg, thge problem is that I dont know exactly whats wrong with it. I suspect sciatica but have a doctors visit this week to try to get to the bottom of it. Still its been improving slowly so we’re getting there. Not running all the time is hard but hey I have Murph to walk and walking does it good I reckon.  And yesterday was the best walk of all because it was his first adoption day – a whole year since I brought him home so we just had to have a hike and party in the beacons with his best buddy Tilly.

All in all the best way to celebrate his adoption!  Hopefully more running again soon =) 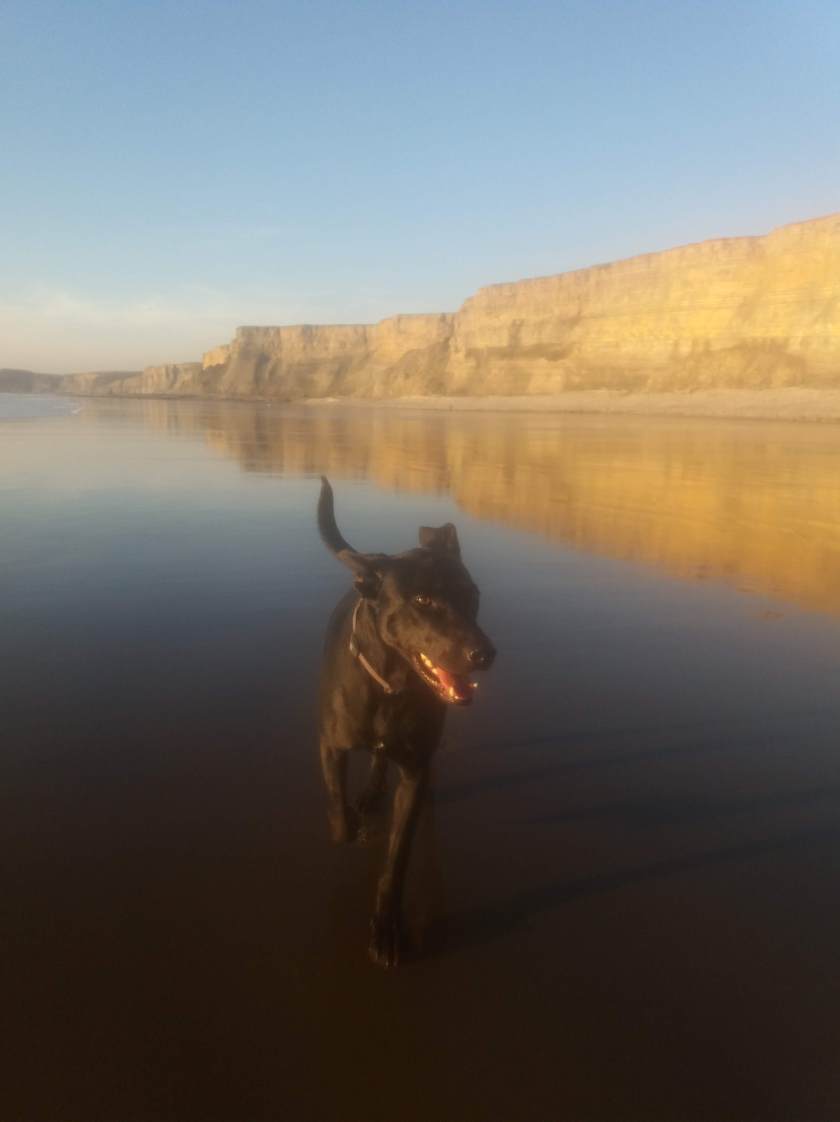 Thats one happy doggo.  We’re both happy to be out and running, so much so it seems I never update the blog. And I say that every single time I post now!

Something else I say every year at this time and I’m always too early is – Doesnt it feel like spring!  I just got back from a beautiful run and whether its february or not it felt like spring!

So what have we been up to? Plenty of runs and plenty of rest days so the niggles dont become injuries. Plus a hiking trip to the Brecon Beacons with friends.

Trust me people winter is officially over – its spring!  (Bet we get more snow)

Things are starting to look up – Ran/walked 7 miles down the beach on saturday with no apparent repercussions and then went for a walk up the Brecon beacons on sunday with no ill effects either.  I’ll continue to ease back gently though just in case.

Ok going back in time …. these two runs were the friday and saturday before the Fan Brycheiniog hike.  Around 10 miles each time and incorporating a nice little loop I’ve found which tacks on as many miles and hills as I like.  Along with the hike thats over 30 miles in 3 days so today is most definitely a rest day.

Went up the Brecon beacons yesterday.  Out into the bits people don’t tend to go and just hiked around a bit with the dog.  It was pretty cold, then hot, then windy then not. Hey im a poet! We didn’t follow the paths mainly as there weren’t any. Its quite liberating and definitely fun to just go where you please. This did mean we spent a few hours or so falling in bogs, marshes and swamps (we havnt worked out which is which yet) but wet feet is a given these days.  Plus Tilly the dog loved every minute of it even if she couldnt see over the grass much of the time I guess.

Couple of days ago I went up to the Brecon Beacons with a friend and her mums dog to find some snow.  We appear to be missing out on the fun down here in the South but I guess one of the beauties of living in Wales is that there are always mountains a few hours away at most. 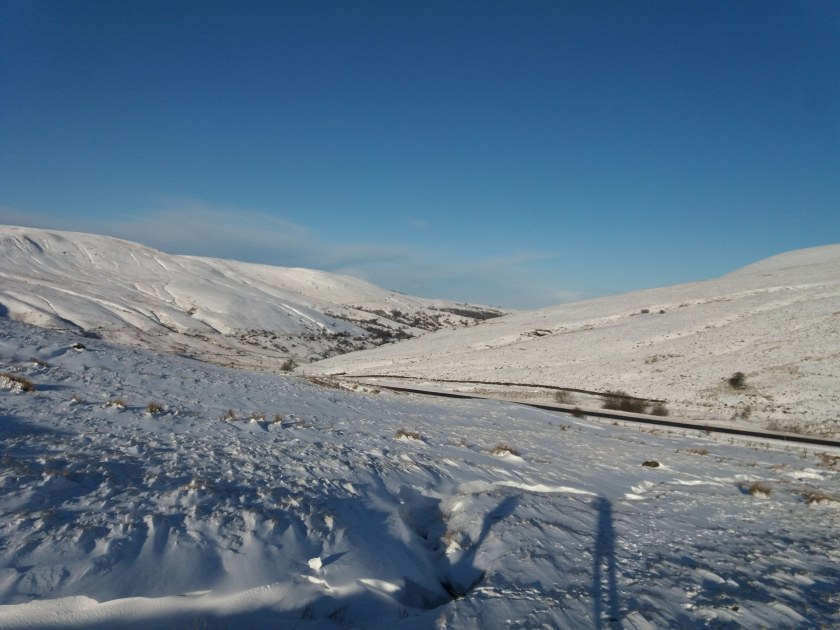 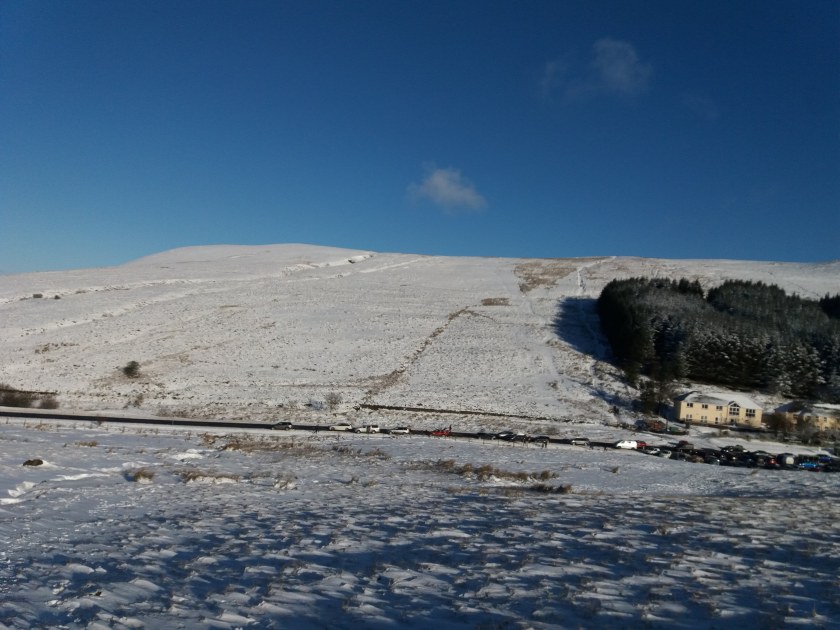 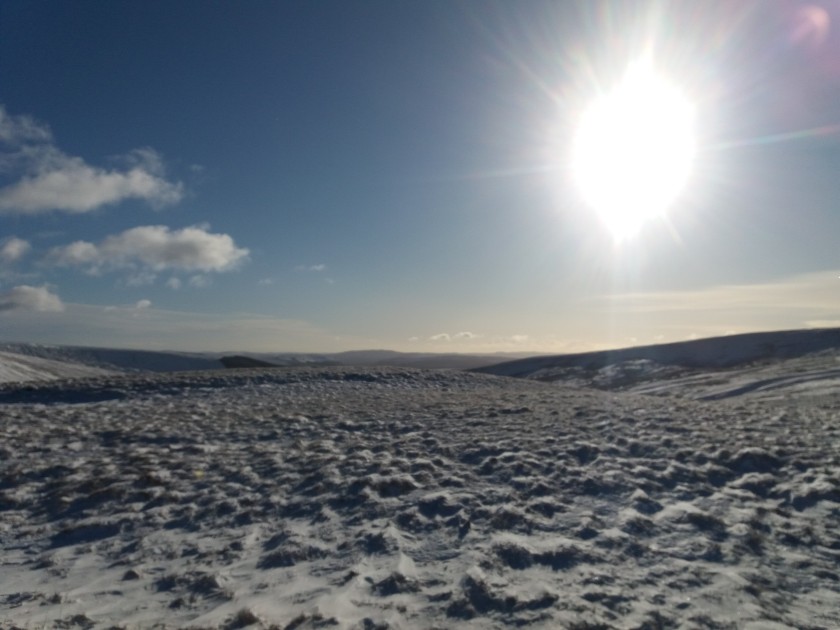 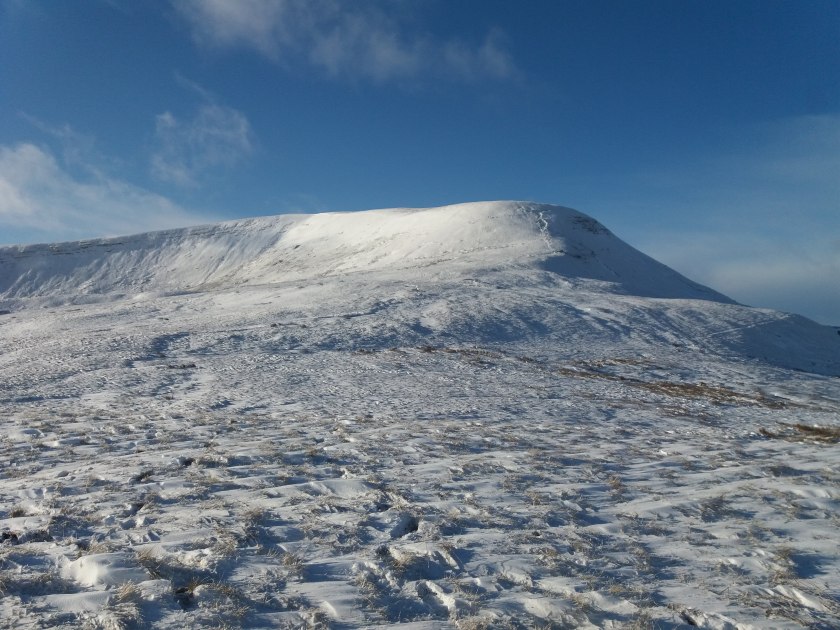 Tilly aka ratdog did actually do quite well and had a whale of a time in the snow. But after a while it was clear she was getting pretty cold ….

So after thawing her out we heaed home where I realised I was technically in my running gear anyway and so it would have been amiss to not get down the beach too so go to knock out seven miles as well.

Took a jaunt up to the Brecon Beacons today to have a run up Pen Y Fan again. Closest we get to mountains in South Wales.  I took a different route this time from the south .  I parked up, got changed and headed off with a pack full of food, water and actual safety items such as a whistle and foil blanket.  I knew the weather was supposed to turn early afternoon so this was an up and downer fairly rapidly.

The best laid plans and all that.  My navigational skills are sketchy at best and the thing about the brecon beacons is that eveything looks the same, no wonder the SAS die out here in training.

After a false start and sinking up to my calves in mud in a forest I found the route to the mountains – in the cloud somewhere. So I had a minds eye picture of where I was and where everything else was but it was meaningless if everything else was shrouded in mist.

Following the sheep tracks was fun up the side of a mountain. Ocassionally my brain would say “ummm you dont know where you’re going” but I shut it off and ran a bit more. I figure there are two important directions on a mountain – up and down. So I followed what I could make out as a ridgeline upwards.

The wind was really picking up now and I packed on some more layers and kept going up and up and up. And then …. The summit!  Only it definitely wasn’t Pen Y Fan – I’d have recognised that even in fog but it was somewhere I’ve never been before.

The view was …… well

I had a choice now to either follow a path off the top but this would mean I was getting really, really lost now instead of just lost and I knew the weather would worsen so I took the sensible option of coming back down the way I came.

Once down in the visibility zone as I shall now call it I followed the tracks wherever they went as long as they headed in the vague direction of the car.  Which took me past the skunk sheep!

And then to a fantastic waterfall where I stopped to eat something. The whole run was only around 8 miles but I brought food so I was damn well eating it. 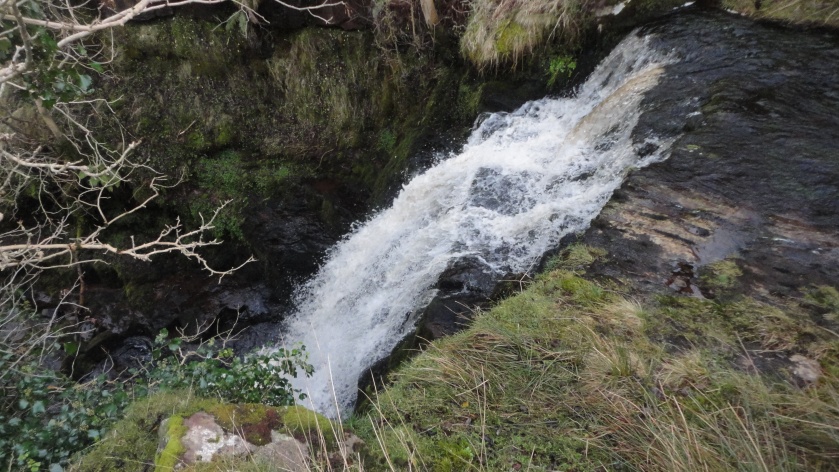 And looking back on a great morning getting cold, wet, lost and tired.  I may not have found the mountain I was looking for but I found what I wanted in the end. 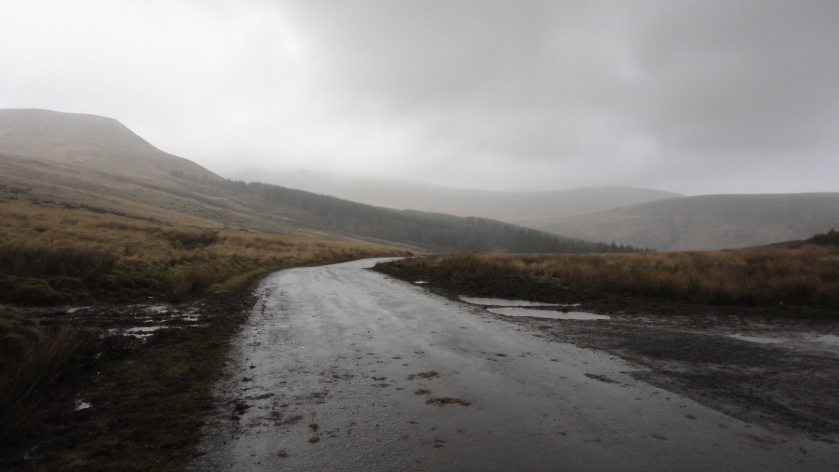 Yep by my admittedly vague calculations I’ve been running a year. I’ve gone from not being able to run 2 fields in a row to the beach to this……

Yep I woke up this morning and thought do something diffent today. So I ran up South Wales’ highest mountain Pen Y Fan in the Brecon Beacons …. the hard way.

I did a bit of googling and found a few routes up it – the “motorway” as its known is an easier path from the A470 which is used by hundreds of walkers … not for me so I ended up at Cwm Gwdi on the other side of the mountain as it promised a much quieter and steeper route with more rugged terrain.  Never ever take the easy option!

So after getting lost in the car as per usual (I’m quite used to this by now) I got there around half eleven and got changed. Chucked my hydration pack on with my nutrition and necessities (I actually took a whistle and foil blanket as I wasn’t sure exactly where I was headed except for up) and set off. Luckily they provide a route map!

The first climbs were brutal …  I was immediately in the red and wondering what I was doing.

I had to settle into a powerhike for some of the next bit as it was virtually unrunnable for me without putting myself so far into the red I probably wouldn’t recover. Perhaps I’ve learned a few tricks in the last year and one is to hold back, this isn’t a race.

There were a series of false peaks at this poinmt which allowed some running in between but then as I reached the last of these I hit the ridgeline!

This was now runnable so off I set at a less than fearsome pace!

From Pen Y Fan its a short trip across the saddle to Corn Du – slightly lower but just as scenic.

I started descending on the other ridge and was enjoying the technical bits of the descent. There were only a few walkers who seemed to enjoy watching me hurtle past to my inevitable doom.

And then it started raining – just like that I was soaked, I went for my jacket from my pack and found I’d left it in the car …. Nevermind a bit of water never hurt anyone but I wanted to get down lower out of the wind.

At this point the rain stopped and although soaked through I was low enough to feel warm again just through running.

The descent continued a few miles down the valley and i was sure I would pop out near the carpark ….. which clearly wasn’t the case. I’d completely forgotten about the map I’d not so carefully studied at the start but luckily my trusty phone’s GPS told me I was in the wrong valley and a few miles away across another huge climb. Being the sensible being I am I declined freestyle rock climbing and simply followed the path down until I hit a road. From here it was a matter of a few miles up some nasty sodding hills to get back to my starting point.

I was wondering if it was worth a 120 mile round trip to do this but It was a great run of around 8 miles of constant climbing and descending with superb views. I was really pleased with how I felt throughout it and that I could even do it at all is something I’m proud of.